'I want to watch the scenery of China on high-speed trains': Syrian Ambassador to China

For Muhammad Hassanein Khalil Khaddam, Syrian Ambassador to China, assuming his post in China in June this year was a long-awaited return.

He lived and worked in China from 2013 to 2017 and thought there was still more to be appreciated.

In interview, Ambassador Khaddam said that China was of so much importance to the world. "I want to watch the scenery of China on high-speed trains, see the mountains, rivers, flowers, trees and the life of local people," he said.

"I knew China from a very early age," Ambassador Khaddam said. "I read a photo collection on China when I was in primary school and was deeply moved by it."

"Each and every photo in that collection was very beautiful."

Since then, the beauty of the culture drew Ambassador Khaddam. He said China has hundreds of kinds of tea and tea experts, just like wine connoisseurs, who can tell where and which year the tea comes from, which was miraculous. The ink-wash paintings of flowers are even more vivid than living flowers.

"I also like Chinese music and am eager to learn to play guzheng (ancient Chinese zither). It cools the spirits of listeners and touches you deeply," he said.

Ambassador Khaddam now has more opportunities to take a closer look at China's achievements in preserving, inheriting and promoting its cultural heritage.

Ambassador Khaddam believes that culture provides a special perspective to know about China and serves as an important bond connecting people from Syria and China.

"Owing to the ancient Silk Road, exchanges between our two peoples have been steady," he said. Ancient silks and porcelains are kept in Syrian museums.

The Nestorian Monument at Xi'an Beilin Museum in China has ancient Syrian words on it. Ambassador Khaddam said, "We need to further advance cultural exchanges between the two countries and pass on to future generations our friendship that has been established for over 2,000 years.

"I feel a heavy burden on my shoulder, for which I work continuously. For example, we are working to open a Confucius Institute in Syria." 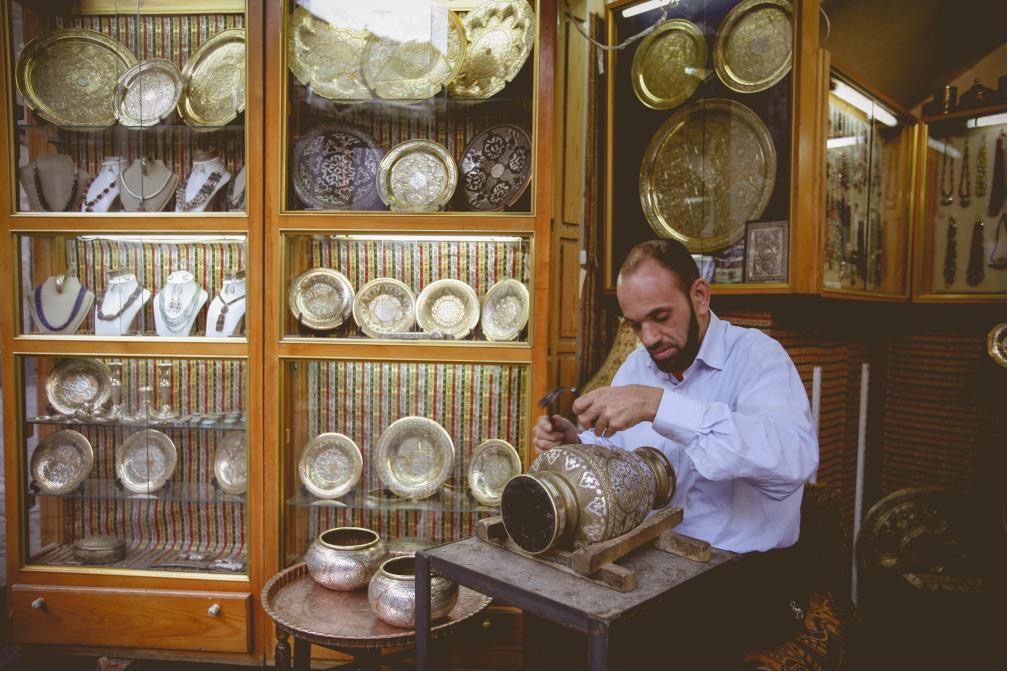 A craftsman in the ancient city of Damascus, Syria (Photo: Embassy of Syria to China)

Ambassador Khaddam marvels at the fast-changing development. "By all standards, China is successful," he said.

“China has more beautiful city landscapes, clearer skies and rivers, and better living standards. China's steady growth has had a huge impact on the rest of the world.”

China has become a major trading partner for more than 140 countries and regions, leads the world in the total volume of trade in goods, is a major destination for global investment and a leading country in outbound investment.

Ambassador Khaddam said China has realized economic development and scientific and technological innovation. He cites mobile payment and says that it makes it possible to go anywhere in China with only one telephone.

"I hope very much to know deeply about how China integrates science and technology with life and benefits its people," he said.

The 20th National Congress of the Communist Party of China in Beijing unfolds a more promising future for China to Ambassador Khaddam.

China has a population of over 1.4 billion and turning into modern society as a whole will not be easy, he said.

"There is no ready-made model to copy. China, on the basis of its historical and cultural tradition as well as realistic national conditions, has explored and found a Chinese path to modernization," he said. "China has eliminated absolute poverty, which is an achievement sufficient to illustrate that it is the right path."

The path of modernization does not mean Westernization, he said. "Countries should explore development paths and governance patterns suitable to their national conditions," he said. "We are doing so. We hope to learn China's experience and implement it with Syrian characteristics."

In June, the Exhibition of Antiquities from Ancient Syria, organized by Art Exhibitions China and the National Library of China, opened at the National Museum of Classic Books in Beijing. The exhibition brought together nearly 200 exquisite artifacts to tell the 500,000-year-long history of ancient Syria, starting from the Stone Age. (Photo by He Luqi/People's Daily)

China is an important force in safeguarding world peace, according to Ambassador Khaddam. Many years ago, with the support of the US and Western countries, the Arab Spring swept the Middle East and dragged Syria into the abyss of turbulence.

"The American forces were stealing our oil every week, every day," he said. "In the past, Syria enjoyed self-sufficiency in oil and could provide oil products to its neighboring countries."

“But now there is an oil shortage. Owing to the lack of oil and gas, many Syrians are suffering from the freezing weather in winter."

America is the richest country in the world but "steals other countries' wealth," he said.

"Over the past seven years, Western media didn't mention anything about it," he said. "It was China and other friendly countries that spoke loudly for Syria, thanks to which the truth was made known internationally. We, therefore, thank China."

Ambassador Khaddam also talked about the support and assistance China provided Syria with vaccines in response to the COVID-19 epidemic.

In the process of Syria's reconstruction, China provided support in transportation and other sectors.

"China cares about Syrian children by helping Syria renovate schools and donating medical equipment to children's hospitals," he said. "China is a trustworthy friend. When Syria is in need, China always stands with us."

He said that in January this year, the two countries signed a memorandum of understanding for cooperation under the Belt and Road Initiative and he hoped to see more fruit generated by such cooperation.

"In the past, Syria's economy was good, Syrian people were well-educated and Syria exported drugs, textiles and food to the rest of the world," he said. "But the protracted Syrian crisis in the past 10 years and beyond has caused a development gap."

He sincerely welcomed more Chinese enterprises to invest in Syria.

Ambassador Khaddam said that through Belt and Road cooperation, China was building roads, bridges, hospitals and schools in many countries and promoting common development. The initiative has transformed countries along the Belt and Road and boosted the development of different regions in the world, he said.

Even the poorest region could realize development through cooperation.

"China never imposes condescending lecturing on other countries, nor will it intervene in the internal affairs of other countries," he said. "Rather it focuses on promoting common development and upholds mutual respect, mutual benefit and win-win results."

"It brings cooperation, so it is welcomed," he said.

By Mao li, He Lie | Haiwainet